Well come back. In my previous post, we discussed how to map one-to-one relationships. If you have not read it but want to make yourself aware of one-to-one relationship mapping in Doctrine using YAML, make sure you read it before reading this post. So, today I am going to show you how to map many-to-one relationships in both unidirectional and bidirectional ways using Doctrine 2. As you are aware by now I will be using YAML instead of PHP annotations or XML. It is simply because YAML is very easy to understand (though you need to stick with proper indentation, which is not a big deal), will not run into unexpected problems, such as pre-compilers/caching engines tend to ignore comments, which will be used in annotations and few other things. By the way, in Symfony 2, you can use either YAML, Annotations or XML as part of the Doctrine configuration, but use one, not all. Symfony 2 evaluates all these methods equally. At the end of this post, you will learn a technique to evaluate your mapping whether it’s correct or not. So make sure you don’t miss anything in this post.

So back to the topic. Let’s have a quick look at what’s many-to-one relationship is all about. In simple terms, many-to-one is many rows of a table can be relate with only one row of another table. Take a look at the image below,

Unidirectional – Many to One

Hence unidirectional relationship only has an owning side, I will be declaring the relevant relationship type which in the ‘Product’ table, which is below, 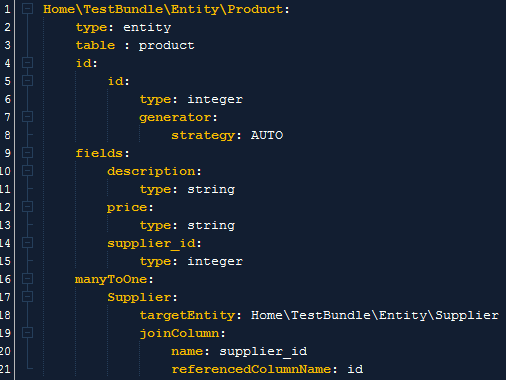 Since it’s unidirectional, we don’t declare any relationships in the Supplier table, which is the inverse side. However take a look at the code, 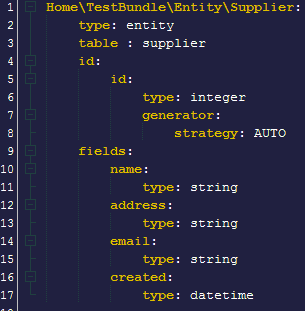 Bidirectional – Many to One

This is where you need to declare relationships for both owning (Product) and inverse side (Supplier) tables. The relationship for the owning table which we have declared above will be remain intact, but you need specify the ‘inversedBy‘ (see the image below) and the entity name. ‘inversedBy‘ is the term Doctrine use to reference from owning side of the relationship to the inverse side. Remember, when mapping a bidirectional relationship, inverse side of ‘manyToOne’ is ‘oneToMany’. Let’s see in another perspective. If from product to supplier is ‘manyToOne’ , from supplier to product is ‘oneToMany’. I hope now that’s clear.

The code for the Product table would be as follows,

The code for the Supplier table would be as follows, 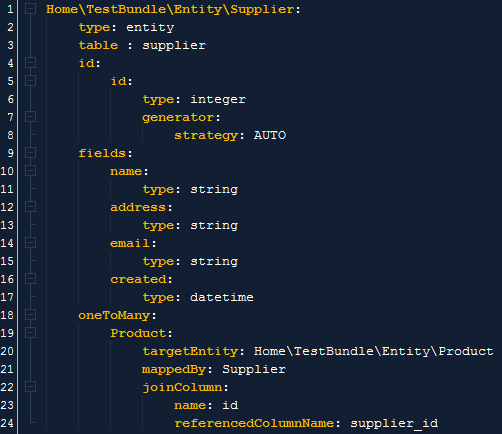 I hope you can see the declaration of ‘oneToMany’ section in the above image. Nothing new in here, but few things to remember,

So this is all about many to one relationship mapping in Doctrine 2 using YAML in Symfony. One more thing, to correctly check whether your mapping is valid, you can always run these commands in the command prompt and see the results.

See more on these commands, http://symfony.com/doc/current/book/doctrine.html

I hope you enjoyed my post. Looking forward to see you soon with another article. Cheers!