As you know, or will know in a moment, there are two major types of relationships between tables. Which are,

And with above two types, the relationship could be,

In this post I will be discussing on all eight combinations starting on Unidirectional/Bidirectional relationship types of one-to-one.

Unidirectional – One To One

In simple terms, one-to-one means, one row of a table, relates only with one and only one row of another table. Take a look at the image below,

Now, here’s the Doctrine ORM in YAML, for the above mapping. 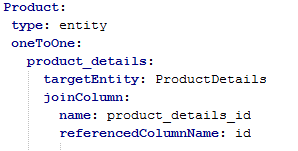 Now let’s move to the bidirectional type of relationship in the same one-to-one instance.

Bidirectional – One To One

The major difference from here to the counter part which is unidirectional is the call back declaration from the target ORM file. In the above example you saw only the parent table establishing the unidirectional relationship. In here, with the above declaration we add the relevant relationship part to the target table which is the ‘product_details’ table. Take a look at the ORM specification for ‘product_details’ table below, in YAML format.

In here, I will not be discussing the same bits which I have discussed above. But still few things to remember in here,